Although the video streaming service Netflix is available in over 190 countries, many markets are still underdeveloped. To further push acceptance in African countries, the streaming giant recently announced a free version of its app for Android users in Kenya to test the waters there and branch out from oversaturated markets like the U.S. and Europe. The pricing model for the future full version remains unclear, though it will likely be in the realm of the countries featured in our chart.

When it comes to the cheapest Netflix standard plans, Argentina and Turkey are the most affordable in monthly fees as well as yearly cost in relation to the average resident’s income, coming in at just under five U.S. dollars. Even the eighth place on the list, South Africa, doesn’t come close to the standard pricing in the United States. There, a standard membership costs 13.99 U.S. dollars per month, while South Africans pay approximately 9.44 U.S. dollars for HD content and multiple registered devices. In relation to real costs, India sits firmly in first place: While a standard subscription only costs 8.81 U.S. dollars, the fees for a whole year amount to around five percent of the average yearly income. Of course, this figure can only serve as an approximate due to the wealth gap in the Asian country with one percent of the richest Indians accumulating 73 percent of the wealth generated in 2017.

While Netflix has been steadily increasing its revenue over the last couple of years, especially due to the global pandemic, its growth in paid subscribers has significantly declined in the first two quarters of 2021 compared to previous years. This can be attributed to subscribers projected for this year becoming customers in 2020 instead, a development Netflix called “some lumpiness in our membership growth”. As of Q2 2021, 209 million people worldwide are subscribed to the streaming service. 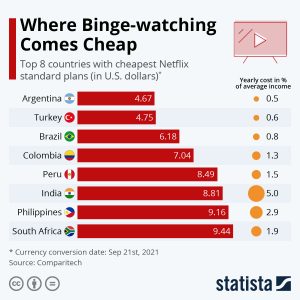